This course provides a bird’s eye view of Annambhatta’s Tarka Saṁgraha, a well-known preliminary book (prakaranagrantha) to studying tarkaśāstra. It is a preparatory course for aspiring scholars to familiarise themselves with the language and scope of tarkaśāstra in simple Samskrit with examples.

To understand and apply the scientific knowledge embedded in Indic śāstras, there are three fundamental technical fields of study known as the Pada, Vākya and Pramāṇa śāstras. These are also known as vyākaraṇa, pūrvamīmāṁsā and nyāyaśāstras respectively. Of these, nyāya is the preliminary basis for categorizing and validating any knowledge.

The earliest systematized lessons available in nyāyaśāstra are the nyāyasūtrās of Rishi Gautama. It was later developed into tarkaśāstra by combining the ontology of vaiśeṣika (a sister discipline of nyāya) and epistemology of nyāya.

Annambhatta was a great śāstrapandita from Andhradesha (Telugu speaking country in South India). His work Tarkasaṁgraha has drawn significant academic attention as a stepping stone for higher studies in śāstras. The technically structured linguistic usage seen in the Tarkasaṁgraha has been borrowed by other śāstra traditions including Vedanta, Ayurveda, and Yoga as well. 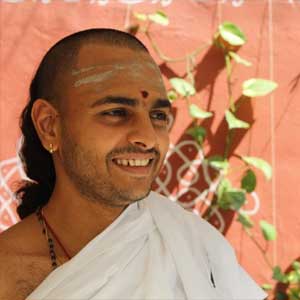 Shri. J. Suryanarayana aims to groom a new generation who can co-relate the values of Sanatana studies in contemporary world. His father, Shri. J. B. Sastry, instilled in him a love for study of both, Sanatana and Adhunatana (modern) disciplines. His traditional education spans Krishna Yajurveda Samhita, Vyakaranam and Advaita Vedanta. He has successfully completed the Maha Pariksha in Tarka Shastra (Nyaya).  He has a rare combination of modern as well as Vedic qualifications and is adept in languages of Samskrit, Telugu, Hindi, English, Tamil and Japanese.

His diverse experience includes teaching at  Sri Venkateswara Veda Paathashala, Hyderabad; He is an adept online tutor including handling NRI students. Proficient at developing good audio video content, his clients include Hindupedia, Vyoma Pathashala.. His works have been published in śāstrārthadīpikā and māṇikyaprabhā magazines.