What are the Indic concepts of state, economy, polity, public finance, public welfare? How did Chanakya, the inheritor of a hoary tradition of theory and practice in these areas think about all these matters? Can we teach students to think like him?

This course empowers children with a systematic understanding of politics, strategy, economics and social systems using Chanakya’s Arthashaastra as the pivot. It kindles enthusiasm for ethical politics and responsible leadership as a career.

Modern day education and understanding, even in India, have been completely moulded by Western theories and epistemology. All areas of learning are suffering from this but none more so than the social sciences.

Ancient India had rich knowledge and culture and a well developed epistemological framework; this has been lost in the mists of time and tools of knowledge we use today are rooted in Western models of thought. There is a coordinated propagation of the narrative that all knowledge emanated in the West and anything, anywhere before that was primitive.

Through this course the objective is to educate students about the rich heritage that we had, by giving a glimpse of extensive breadth and depth of knowledge that resides in our traditions.

In the areas of economics and political science this is extremely pronounced. The gap in knowledge of students in this area is colossal precisely because there exists a corpus of learning called the Arthashastra which is a seminal work in the Indian or indeed international context.

What were the Indic concepts of state, economy, polity, public finance, public welfare? How did Chanakya, the inheritor of a hoary tradition of theory and practice in these areas think about all these matters? Can we teach students to think like him?

Going beyond a narration of history, I aim to draw parallels with contemporary issues and challenges of India and humanity in general, with a view to ignite young minds to look for solutions in tried and tested ancient methods.

The snapshot in history that I use is that of establishment of the largest empire in ancient India – whose architect was Chanakya and which was established by Chandragupta Maurya. The treatise of Arthashastra is the pivot for this series. 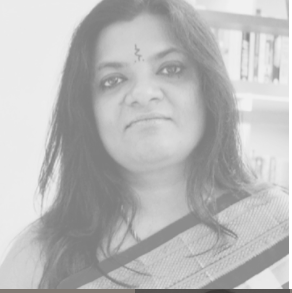 Sumedha Verma Ojha is an author, columnist and speaker, was born in Patna and educated in Delhi, graduating in Economics (Lady Sriram College) and post-graduating in Sociology (Delhi School of economics). After 15 years in the Indian Revenue Service she switched careers to research and write a book set in the Mauryan period based on the Arthashastra of Chanakya. ‘Urnabhih’ then expanded into a book series on the Mauryan Empire. Sumedha is a Member of the Editorial Advisory Board at Indic Today.

She works in the area of translating and explaining the epics and bringing ancient Sanskrit/Prakrit literature to the English speaking Indian as also in the area of a gendered analysis of ancient India. She lives with her husband near Geneva and has two children both studying in the US.