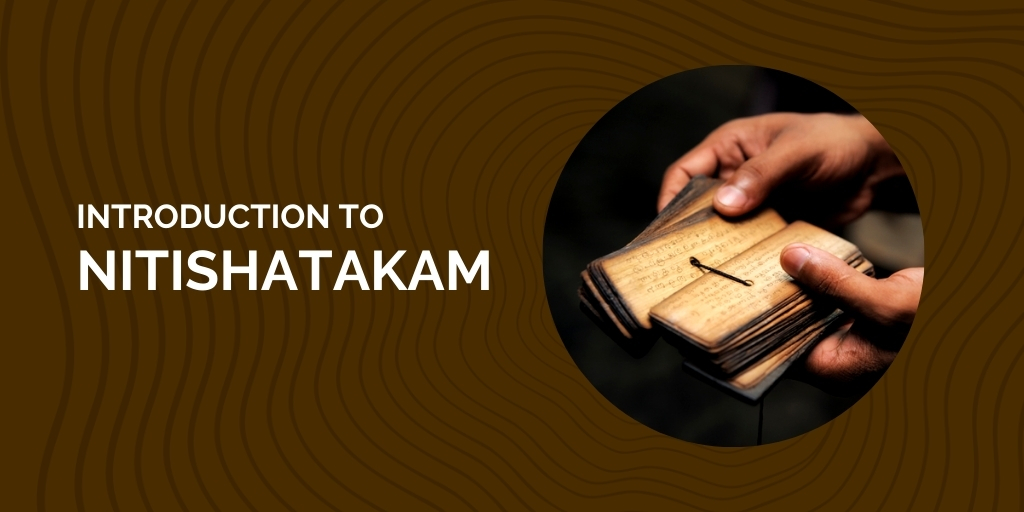 Sanatana Dharma of Bharata, called Hinduism, by the west is one of the most ancient cultures of the world. As a very ancient cultur,e it has an abundance of ‘subhaashitas’, words of wisdom, verses of good advice honed to perfection to be handed over to the future generations. They are advice of how to navigate and also change one’s perspective and approach appropriately to solve any issues, how to choose a proper way to a better future smoothly, without an inner or outer conflict with society. The verses are in a variety of Sanskrit meters and they bring beauty to the chanting and singing of those verses. When these subhAshitas are memorized or chanted with understanding, whenever we have problems or depression, they help us to come back to normalcy and be delighted.

Niitishataka is admired for its brevity, lucidity and positive exposition of the foibles of human society and also tells what is preferable and what is to be eschewed and why.

Niitishatakam verses are for anyone interested in understanding the various human natures, social values, and their impact on an individual and the society.

Bhartrhari’s nItishatakam is, as the name itself suggests, is a set of hundred verses on morals and ethics of human behavior. Bhartrhari has divided these hundred verses into ten topics of ten verses each. Each topic concerns itself with a particular aspect of human mind which are vital for good social behavior. There is subtle humor also in his writing.

The objective of these shatakas is to bring about the social values in the society so that people follow these advises and live guilt free and calm life and to gain knowledge how the ancient Bharata pursued the values of life reconciling the sensory and the Para sensory worlds which is still in vogue by and large in the land of Bharata.

With advice on how to lead a calm and collected life, it uses many approaches ranging from straight advice or gentle persuasion to making one realize how to choose the appropriate course of action and also to make fun of the short comings of society. To be made aware of the socio cultural short comings which are better to be eschewed or corrected and to eliminate the incongruencies’. They also indicate of how to modify life activities due to changing circumstance in societies over time making ones goals and goals to be more amenable for a smoother pleasanter life.

The Hindu system of thought has a huge amount of such subhaashitas accumulated over thousands of years covering all aspects of human life which makes its conclusions universal. The study of such literature also gives us a historical perspective of the changing society in terms of its goals and the methods adopted by the people through the centuries. Thus one can trace the historical modifications that have happened to this society in this land of Bharata over time.

But the strange thing is, many of the subhaasitas are not only  just relevant to the times and geographical land of Bharata but also is universal as well as applicable, which makes these observations to be of eternal values, valid for all humanity. Hence having some glimpses into this literature is worthwhile and be beneficial too in our lives.

1.  Prabhusammita Literature which ordains the behavior that one should follow. They are the Vedas. It is more like a verdict, if violated there is a liability of punshiment. It is like a royal (prabhu- master or king) command.

2. Mitrasammita Literature which uses a gentle persuasive technique of a friend (mitra) to make one not to indulge in life negative activities and follow willingly the path positive. They are smrtis, puraanas etc.

3. Kantaasammita All literature like itihaasa, kaavyas like poetry, drama, and other literature which is like a beloved (kaantaa) who entices her lover with entertainment attracting the other to follow proper life style out of love.

The Neetishtaka belongs to the category of Mitrasammita. Even though these types of literature are verses regarding morals and ethics of human society, they are not dry literature which will just narrate the codes of conduct as a book of law.

Among such texts, the most famous one is the Niitishataka of Raajaa Bhartrhari. Raajaa Bhartrhari who belonged to the Royal house of Ujjaini; and though he was entitled to the crown, he is said to have abdicated the throne in favor of his younger brother Vikramaditya, the founder of the Samvat Era.

Bhartrhari chose the life of renunciation and an academic. He has been a linguist as well as a poet philosopher. He is the author of the famous work on grammar known as ‘Vakypadiiyam’ a work which deals in detail about the relationship between words and sentences in a meaningful communication.

The other work known as ‘shatakatraya’ is a work on three major aspects of human life that is morality (nIti), love (shrngAra) & detachment (vairAgya). As the very name indicates it is three hundred verses divided into three parts.

The first of them, the niitishataka, is the advice to guide people in their daily life and it lays emphasis on the moral virtues such as self-respect, perseverance, benevolence and moral courage etc. It also pictures the frailties of the world in a humorous way and tells to choose a better way of life. The second ‘sringaarashatakam’ deals with women and the mutual attraction between man and woman, their enjoyment as well as the possible disappointment in their life amour. The third one is ‘vairagyashatakam’ which extols the life of a renunciation, which how by eschewing worldly desires one can gain liberation.

Among these three ‘Niitishatakam’ is the most popular one among the scholars. It has been divided into ten sections each having ten stanzas. Each is called a paddhati or the way of life. They are

One may ask what we gain by studying this ‘niitishatakam’. These hundred verses as they deal with different aspects of human life expand our vision about life’s goal and also help us to understand this multidimensional society. It also guides us to develop the skill of what to avoid and what to gain and hence to have smooth sailing of life. The knowledge of many dimensions of society which is not in the domain of experience for each and every individual but by studying Bharatrhari, awareness expands and helps us realize how to tackle when one gets exposed to such a situation.

We invite you to our Indica Course on Nitishtakam to explore and experience it for yourself.