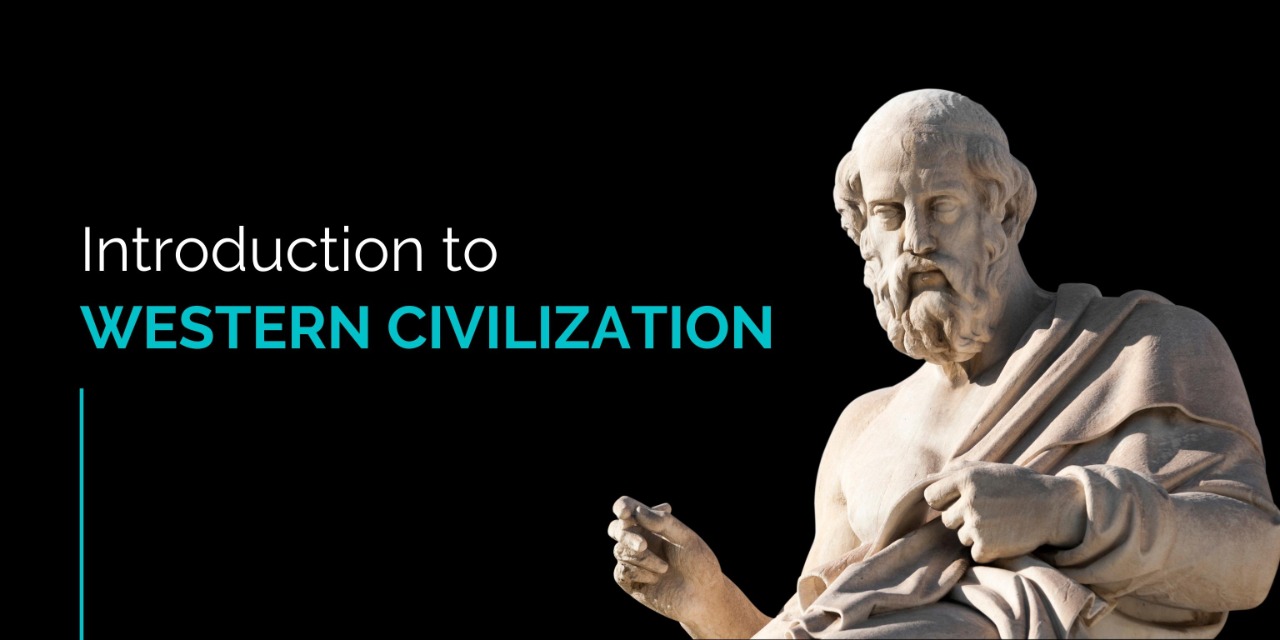 My next Indica Course is something of a departure for me, a survey of the Western knowledge system over the past 2,800 years. It will focus especially on philosophy, because I believe that every civilization articulates its self-understanding through its reflections on the nature of being, truth, and knowledge, but the course will also take account of other forms of cultural expression, especially since Western identity has been shaped so much by scientific thought, on the one hand, and literature on the other.

Because the West colonized the world, the gaze of “Western civilization” has become globally hegemonic, which has given rise, in turn, to a decolonial project among colonized peoples that seeks to turn back that gaze, to understand the thought behind it, in order to open possibilities for thinking differently on the basis of their own traditions and lived experiences. I see this course as a contribution to this decolonial project. Inasmuch as I am not a member of any colonized people, one could say that my contribution is as a “native informant” with respect to my own, Western tradition. It is a tradition in relation to which I am also a dissident in certain respects, chiefly in being a polytheist, when monotheism has for a long time been a prime “Western” value. The tension in my relationship to what is ostensibly “my” tradition, however, goes back a good deal further than that, since I was not raised a polytheist, but I was raised to be critical of the society around me. My understanding of “the West” is one in which the scare quotes are, in effect, congenital. I believe that there is something appropriate in this, however. I was brought up to view the Western tradition in a critical fashion, but at the same time, to believe that this critical attitude was, paradoxically, the best way to honor it. Furthermore, like most research-oriented academics, my scholarly work has previously been engaged largely with texts for which I felt a spontaneous affinity, my specialization being in the Platonists of Late Antiquity, polytheists and fierce critics of Christian hegemony in their time. But in this course, I am trying to come to terms with the entire tradition as it has been, and not as I’d have liked it to be. As such, I am not attempting in this course to revise the canon, which has been one valid approach to teaching “Western civilization” after colonialism and multiple genocides, but instead am dealing only with texts that have a meaningful history of reception as well, and to understand the characteristic way in which Western thought constitutes itself by the construction and criticism of its origins.

What do we mean by “the West” or the “Western tradition”? Any simple answer to this question will be inherently flawed, because the concept of essence and the critique of essence are equiprimordial in this tradition. “Western” identity is essentially teleological, a goal, an identity that nobody therefore simply possesses or has accomplished. In this sense, Odysseus is a paradigm of this identity when he tricks the Cyclops by giving his name as ‘Nobody’ (Outis in Greek), so that when the Cyclops tries to call for help, his appeal fails, because he says “Friends, Nobody is murdering me by craft!” (Odyssey 9.408). The ambivalence of citing this episode as a symbol of “Western” identity is deliberate. “Western identity” has always somehow been conceived as procedural, and this is also the basis on which it has always sought to impose itself upon others, on the idea that they too could be “Western”, i.e., civilized, if they wished and applied themselves hard enough, and through their success, they could change the definition of what it is to be “Western”, too. As soon as one has recourse to something concrete to delimit “Western” identity, by contrast—race, sex, even religion, as fundamental as Christianity has been to the notion of “Western” identity for some 1,500 years—one’s conception of that identity is immediately historicized by this concrete element, and hence superseded. This mechanism of historicization and supersession is indeed one of the key things we must try to grasp in this course. This conception of identity constantly formalizing its concrete determinations has formed the basis of critique, the West having, we might say, adopted critique as its civilizational specialization long ago. However, this also makes “Western civilization” itself a moving target for critique, as it seeks to deny responsibility for its deeds on the basis of this ideal of continuous self-critique, so that, like Odysseus, its name is ‘Nobody’.

One of the first questions I had to answer for myself in preparing for this course was where it should begin. I find that the most unpleasantly ideological portions of ‘Western Civ’ textbooks are the first chapters, where we usually find some scraps of Mesopotamian and Egyptian civilization displayed as if in a zoo. There are two possible ways to relate these civilizations to “the West” appropriately, in my view—the first is through the acquisition of their texts in the 19th century, which is part of the story of colonialism; the other is where Mesopotamia or Egypt is the center, and “the West” its periphery. There is indeed a passionate phantasmic relationship to these earlier and more integral civilizations, beginning already with the Greeks in antiquity, but to express this desire as primordially consummated is exactly the problem. The whole point is that “we”—ideal, projected “Westerners”—never had the Enuma Elish, or the Egyptian resurrection literature, or even the Torah, until we took them, and in just the way we did that, while, to the degree that they shaped “us”, they had (and have) us, “we” don’t have them, even now. “We” don’t have them because they are not part of “our” teleology, but of their own. They are not the infancy narrative or prehistory of the West. As such, though Egyptian civilization is one of my lifelong passions, I do not feel it appropriate to begin the course from there, or from any other tradition which has not been part of the reciprocal dialogue of the Western tradition, with a chance, at least to some degree, to answer back. I decided that the course would have to begin, therefore, in Greece, and not somewhere else.

It’s a basic misconception that Greek philosophy is fundamentally critical of Hellenic polytheism. Rather, I believe that the Western philosophical tradition derives its antifoundational and critical tendencies ultimately from Hellenic polytheism, specifically from that tradition’s tendency to resist centralization. This tendency can be attributed to political circumstances in archaic and classical Greece, but it’s also an expression of the polycentric character of polytheism as such—though not the only possible expression of it. This being said, we also need to understand the factors determining the West’s monotheist turn in Late Antiquity. The roots of the monotheist turn in the West have been misunderstood by those ideologically committed to seeing it as ‘progress’, but the answer cannot be to see monotheism as something alien which simply imposed itself, either. My effort is to understand monotheism as emerging in the West as a dialectical moment, the contradictions immanent to which lead to its overcoming.

Those already familiar to some extent with the history of modern Western thought will discern that this characterization has a Hegelian flavor to it, although its destination is not the one he would choose. A reckoning with Hegel is unavoidable in any such survey. Hegel’s philosophy, like that of all the other thinkers we shall consider in the course, will be regarded both as the expression of an historical situation, conditioned and determined by that situation, limited by it, and, on the other hand, as a timeless figure of thought, conditioning and limiting that which would condition it. One of the deepest problems with which the Western tradition has concerned itself is that of history and historicism. When Heraclitus said “The way up and the way down are one and the same” (frag. B60), he was in a sense framing his own version of what Parmenides meant when he said “The same thing there is for thinking and for being” (frag. DK3). If Parmenides’ maxim is the charter for idealism in this tradition, Heraclitus thinks the ideal as a narrative circling back around to affirm its end as its beginning.

While it could be said of any tradition to some degree, it is distinctive of the West how much its “origin” lies in the future, in the narrative which will be told about the emergence of “the West” and the value that will be accorded to the texts comprising it. At a certain moment, this futurity took the form of whether the texts of the ‘pagans’, a new category of internal Other, would actually survive or not, which would be decided in terms of their value for the Christian eschaton, the anticipated end of history, in which the physical body, perishable and contingent by definition, would be resurrected—that is to say, when all of history’s accidents would either be redeemed in their narrative logic or condemned to oblivion, endlessly consumed but never transfigured. This creed having been itself digested, it manifests itself now in the question of how all the self-understandings in their historical frames will be evaluated, and the story which will be told about them. As such, the presentation of texts in this course cannot be entirely chronological; certain ideas can only be properly grasped at the point that they come into focus historically—at the point, that is, at which they have their impact.

With respect to practical matters, finally, this course will be like my prior Indica Courses as to homework, tests, final papers and such. I don’t see the point in making people do work they’re not motivated to do themselves. As such, I will be available to critique any writing people wish to give me in connection with the course, but I’m not going to demand it. If people wish to just listen to the lectures, they will be free to do so. Furthermore, the course can be taken asynchronously; many of the participants of my last two preferred to do so. If the day and time aren’t good for you, you can watch the recorded lectures and interact through the discussion board.

I’ve tried to explain a bit here about how I am going to be approaching this course, about the basic insights that will be guiding me. These ideas are still evolving, and will continue to evolve as I teach it, a journey on which I hope that you will be joining me.

These ideas are still evolving, and will continue to evolve as I teach it, a journey on which I hope that you will be joining me.