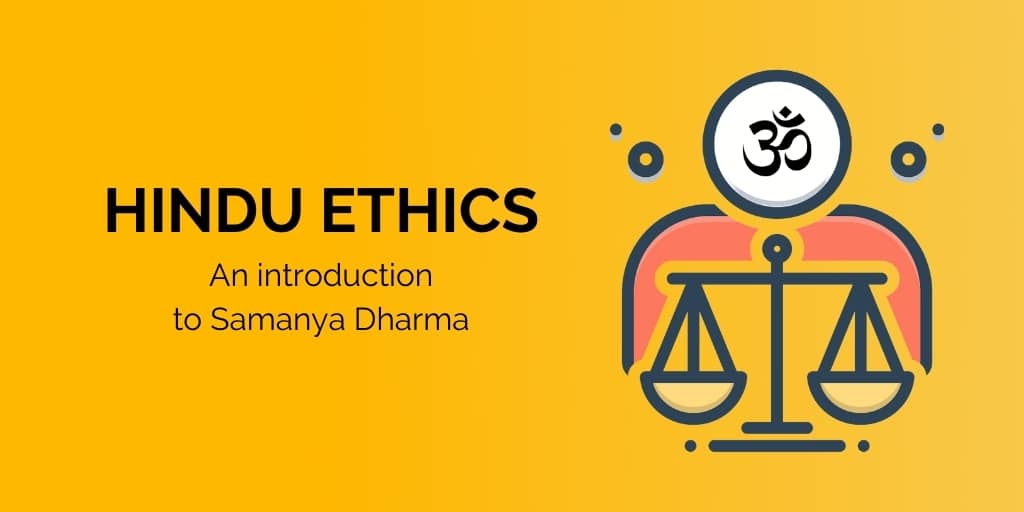 Nithin Sridhar will be teaching an Indica Course on Hindu Ethics.

Hindu dharma speaks about four fold goals of human life termed as ‘chaturvidha purushartha’. ‘Purusha’ means human and ‘artha’ means object or goal. This framework of life wherein each human being has an obligation to pursue the four-fold goals in his or her life is a unique and very important contribution of Hindu philosophy. Human life is considered very precious because when compared to plants, animals and other organisms, it is humans alone who have a fully developed faculty of intellect.

All organisms except humans are invariably driven by natural instincts. Though these naturally developed instincts help organisms in their survival, they also bound and limit them. It is humans alone who are not limited by natural instincts and hence can exert their discrimination and free-will. It is to regulate and provide a guidance for the exertion of this free-will in a righteous and meritorious way that, the scriptures have advised the framework of four-fold goals that a human should strive to attain.

The four-fold goals of human life are- dharma, artha, kama, and moksha. Kama refers to all kinds of worldly desires. Every person has one or the other desires or fantasies that he or she wants to attain. The desire may to look beautiful, or earn money or having a relationship with a person. Every kind of desire can be categorized under kama. Similarly, all wealth, all objects that are acquired in order to fulfil the desires and enjoy a comfortable life is termed as ‘artha’. In short, kama and artha refers to enjoyment of worldly pleasures and worldly objects respectively.

But, it is not desirable to lust after all kinds of desires and objects. If, a person does so, it would surely lead to his fall. A person who kills someone for sake of his money will surely end up in prison. Similarly, a person who is unable to control his sexual urges may end up raping or harassing a member of opposite sex and hence he will also end up in prison. It is dharma or the sense of righteousness and duty that should decide whether an action is desirable or not, whether a desire or property must be acquired or not. Without the principle of dharma, the world will end up in chaos. Hence, the principle of dharma must act as a guiding force in the pursuing of kama and artha.

Now, coming to moksha, it refers to ultimate liberation from the bondage of the world and a permanent establishment in knowledge and bliss. All spiritual paths are aimed at achieving this one goal alone. But, this Moksha cannot be achieved by a person who is completely attached to worldly pleasures. Only such a person who adheres to dharma in all his actions will eventually develop the purification of mind and dispassion towards worldly pleasures that he will be able to turn his mind towards Supreme Emancipation. Hence, a practice of dharma becomes inevitable in attaining moksha.

Literally, dharma means that which upholds. Mahanarayana Upanishad (79.7) states that dharma supports the whole cosmos and removes all sins. Similarly, Lord Krishna in Mahabharata (Karna Parva 69.58) says that dharma is that which upholds all created beings. Vaisheshika sutras (1.1.2) describes dharma is that from which causes material and spiritual attainment in everyone.

These universal tenets of dharma like Satya (truth), Ahimsa (non-injury) etc. that are applicable to every person irrespective of his class, gender or station in life is termed as ‘samanya dharma’. These constitute the principles of Hindu ethics.

On the other hand, those duties, those obligations that are unique to every individual depending on the kaala (time), desha (place), varna (class based on guna) and ashrama (station or stage in life) are considered as ‘vishesha dharma’. An Individual’s sva–dharma (personal dharma) is a combination of both common and special duties.

In fact, without an adherence to samanya dharma, a person can never do justice to his practice of special duties. For example, a Brahmana priest who becomes greedy, and asks hefty amount of money as dakshina for conducting a ritual, becomes ineligible and incompetent to conduct such rituals; as he has violated one of the basic tenets of common dharma– the indriya nigraha (the control of the senses). So is the case with a businessman who is cheating his customers for earning more profit.

Hence, a practice of both samanya dharma and vishesha dharma are vital for overall wellbeing of an individual and without the former (ethical duties), one becomes ineligible to perform the latter (i.e. special duties).

Further, the practice of ethical tenets is crucial for not only establishing a harmonious society, but is basic requisite that imparts required qualities that makes one eligible to practice any genuine spiritual path.